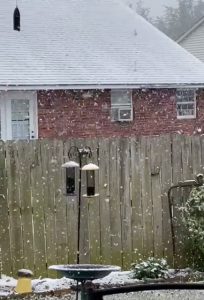 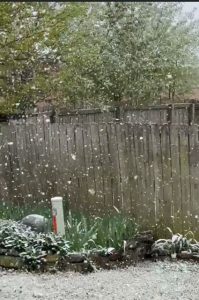 On April 20, 2021, after a week of weather that saw temperatures reach into the mid-70s, it snowed in Northwest Arkansas and surrounding states. The firmament opened up and fluffy white flakes poured down, collecting in small drifts on the roofs, front yards, and garbage cans of my neighborhood.  And beyond the obvious conclusion of, “Gee, it’s kind of late in April for snow in this neck of the woods,” people waxed profound and comical, depending on the lens they looked through.

For marijuana users, it was certainly a symbol that God got high and in his new state of mind, played a little joke on us. And if you listened very closely, you could hear the stoner banter: Dude, this just proves two things. God likes ganja, and he has a highly developed sense of humor! Of course, it’s entirely possible that some people smoked far too much to honor this most holy day in the kingdom of Buddom, and began to panic that they were having hallucinations on par with a mushroom trip.

There’s also a distinct chance that a lot of users were asleep in a cocoon of indica-induced haze and just simply, in the words of Shel Silverstein, “missed it.”

Then there are the climate change warriors, who undoubtedly saw the event as a harbinger of the impending environmental doom poised to descend upon us like a twisted second coming, a karmic karate chop to the collective soul of humanity for its audacity and shortsightedness to rely on petroleum as a means of energy and commerce.

They are a more vocal group, so one could unquestionably hear them all tweeting, and pinning, and posting, and composting, as they worked themselves into an emotional frenzy and social justice fervor.

For me however, it was more a soft sign that the universe is as it has always been: unpredictable. Due to our progress and reliance on technology, we have created a shared illusion that we can manage nature. We build our homes on elevated slabs to prevent flooding, we have doppler radar to warn us with timely information, we drive cars that are equipped with technology that far exceeds the equipment used to propel astronauts to the moon just a few decades ago.

We are ensconced in infotainment systems that calculate routes, dial people in our smartphone contacts, and serve up music on our playlists that we crafted with such loving care. It is a bubble inside a bubble, a joint joy ride for American culture as we persevere to maintain the thin and fragile veil we fashion to cover the harsher realities of life.

And on the broader humanity level, we are just a heartbeat away from the mother-of-all meteorites that would rival the Chicxulub impact that spelled the end for the dinosaurs, or an electromagnetic pulse (not a dance term) that would utterly destroy our digital infrastructure, throwing our economy and way of life into chaos, no doubt causing a level of panic that would eclipse 9/11 on a cosmic scale.

But this unpredictability is the very essence that makes our lives worth living. On any given day, we could be rescued by an angel through divine intervention; we could win the lottery; we could land that dream job; we could fall in love with a person who transforms our life on multiple dimensions; we could find God in a church or in a sunset; or we could hold our baby in our arms and feel such a profound sense of love that we are connected in a way that is immeasurable.

As the eminent psychologist Carl Rogers puts it: “a person is a fluid process, not a fixed and static entity; a flowing river of change, not a block of solid material; a continually changing constellation of potentialities, not a fixed quantity of traits.”

So, if we can take anything away from this meteorological anomaly, it is this: The universe is an unending river that promises a hell of a ride with no guaranteed destination. Keep your eyes open and your ears attuned, because you never know when the bell will toll, or for that matter, when it will snow. Is Cannabis Beneficial for Anxious Eaters?